Tales Around the Sunday Table; a Christian Response to Homosexuality

Tales Around the Sunday Table; a Christian Response to Homosexuality 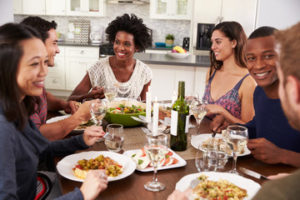 When I was a little girl, my sister’s best friend’s father loved and welcomed me as his own. I was in a place in life where I needed that extra measure of care. Bill baked rectangular pizzas, in a baking sheet, and I found them to be the best! Eventually, Bill began baking pizza’s regularly (for me) on Sunday nights.
The stability that accompanied the sacrifice and commitment of the new tradition was of great value to the little girl I was. I lived in a world where I had much freedom and little grounding. At a young age, knowing Bill was making me pizza on Sunday nights was more valuable than anyone really knew.
Other people caught wind of the pizzas on Sunday nights, and like me, the budding tradition and unconditional love that was being served up drew them in too. Before long, the dinner evolved into a regular Tuesday Night meal for those who wanted to come. Bill and his family opened their home and their table for a crowd that in large part consisted of many young adults, perhaps seeking the same stability that I found around the table.

All sorts of people knew there was a seat for them; it was a gift that spanned hearts, years, generations and life events.

For a long time, I have wanted to reproduce something similar in my home; to say “We’ll have a place for you.” As my children began to grow and spend less time at home, I hoped they would always know there would be dinner served for them and whomever else would like to join us on Sunday night.
My husband, Bryan, recently met Bill on a trip back to Austin. As we fellowshipped around my mother’s dining room table that Sunday, Bryan got to hear incredible stories that developed from the Tuesday night suppers at Bills. Bryan caught the vision, and we came home with a plan for casual Sunday night dinners for people in our community.
If you would like us to include you, please let us know.

Our first dinner consisted of a motley crew; even I didn’t know everyone.

We invited a lot of people, and in the end, there were 10 of us; a perfect number, it turned out, to sit around my dining room table. We spent, what felt like hours, connecting with each other. We took turns going around the table, sharing who we are and something that made us unique. One of the first people to share was a man who had a story unlike any I had ever heard. Brought up a conservative Bible-believing Christian, he had married and had two children. His conservatism led him to serve as a politician for the Republican party. He was following the path that was set out for him until, when he was around 50 years old, he began to understand something was not right. He shared how it felt as he came to terms with the fact that he is gay.
His realization brought many painful feelings and realities. He turned to God, “Change me, God,” he implored. He didn’t want to bring pain and shame to his family. He wanted to die, to spare his loved ones from his reality. He considered ways he could commit suicide so that his loved ones would think his death was an accident and be spared the truth.

Eventually, he heard God. “I will not change you. I made you that way.”

What a shock for any Christian to hear. Many churches indoctrinate members to judge. Often evangelical churches teach us that all anyone needs is to be shown the truth in order to be led out of that sinful lifestyle.
Over the years I have heard plenty of people share about how God rescued them from homosexuality, but this was the first Christian I heard share how God comforted him, letting him know He made him that way.
Six years ago I was going through my cancer treatment when God spoke to my heart about the fact that I was judging gay people. He made it clear to me that He loves all of us identically. It was the beginning of my journey of not putting people in boxes because if their sexual orientation.
During our dinner, this man’s partner also shared his story. Another friend who is gay was at our table. Unlike the men, she knew in her teens, and she shared horrific abuse and rejection that she suffered over the years. Some of her most painful assaults came as she was forced to attend church while being prevented from participating in the Eucharist. She was publicly humiliated from the pulpit by the priest.
I have kept my love of homosexuals under wraps for a long time, for fear of being rejected by the church, as a Christian leader. Last year, however, the Lord called me to “come out,” and I did. The response was overwhelming from Christians in particular, who have children and loved ones who are gay and needed a Christian leader to stand up for LOVE!
We just had gay pride month, and that can make a lot of people uncomfortable. Even many of my gay friends choose not to associate with some of the obscenities that show up. I, for one, do not want to be associated with the hate that comes from many Christians. People cloak their hated and judgment in the standard saying “Love the sinner, hate the sin.” If you call yourself a Christian and are more concerned with scripture against lifestyles and less immersed in the overwhelming message of love, please recognize that you are not representing my faith, my God or me.
“For with the judgment you pronounce you will be judged, and with the measure you use it will be measured to you.” Matthew 7:2 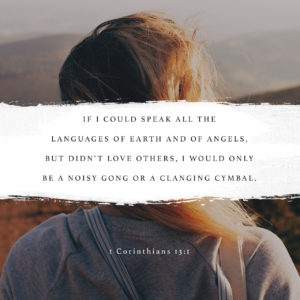 If you are like me and feel the calling to love despite the teachings of many churches, have the courage and “come out.

I hope one day you’ll join our Sunday night dinner and share your story. If you are not local, make your table where people can come to feel a sense of community, no matter who they are.

The Way of Love

13 If I speak in the tongues of men and of angels, but have not love, I am a noisy gong or a clanging cymbal. 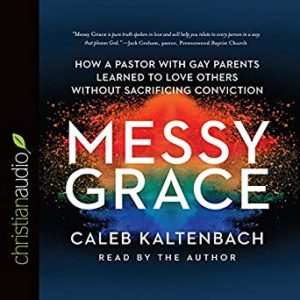 I really appreciated this book Messy Grace written by a pastor Caleb Kalenbach, who has gay parents.