She Calls Me Rachel 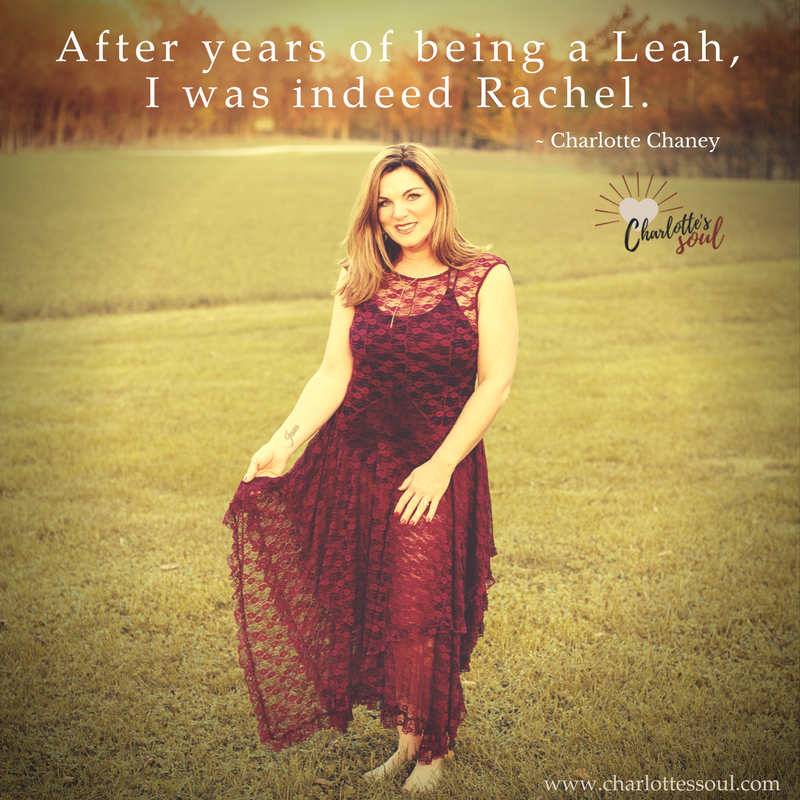 She’s one of the wiser, matriarchs in my new church. Every time I see Lyn, she makes a conscious effort to get my name right. But, she has a mental block and continually says, “Rachel, right?”
She’s not short on memory, even though I gently remind her each time, “No, my name is Charlotte.” Then I ask, “May I share a story with you?”
We sat down in the pew. I began to tell her what the story of Rachel and Leah, from Genesis 29, has meant to me for years. Lyn was familiar with the story. Her eyes filled with tears as soon as she realized how God was using her.
I will take a moment and share for those of you who may not be familiar with the story of Jacob’s two wives. You may find yourself with tears in your eyes, too.
This is how I tell it. Please refer to Genesis 29 for accuracy.
One day Jacob discovered Rachel in all her beauty. She must have radiated all he could have ever wanted, both inside and out. Suddenly nothing else mattered, Jacob’s whole life was aimed at having Rachel for his bride.
Rachel’s father, Laban, saw a heck of an opportunity. He addressed Jacob, “Ok, you may marry my daughter, but you must first put in seven years of hard work.” Can you imagine, seven years to labor for the woman of his dreams? But, he did it. He gave his life so he could have Rachel.
Now Laban had an idea. He realized a way in which he might get an extra measure of quality work from Jacob. When the time came for Jacob to finally take Rachel as his bride, whom he’d worked fervently for, Laban took advantage of the authority of the day. Laban committed something atrocious.
Rachel had an older sister. She was not beautiful. Leah was not someone whom a man like Jacob would bust his back tirelessly for seven years to marry. No one wanted Leah. So Laban did the unimaginable. He veiled Leah for the wedding ceremony instead of Rachel. Finally, when Jacob could put his hands on the woman of his dreams, he discovered Laban’s deception. Jacob realized he was married to Leah.
Imagine the sorrow in his heart, the anger, the horror and disgust he felt from the deception.
Imagine what it was like being Leah.
What did she feel like to be such a hideous disappointment to her husband?
How did it feel to have a father treat her as though the only way she could secure a husband was through deception?
Talk about the ultimate humiliation!
Oh, Laban was sly. He promised Jacob, that if Jacob gave him another seven years of dedicated work, he would allow Jacob to marry Rachel as well. Jacob, of course, was willing to do anything for the desire of his heart.

Can you conceive what it was like to be the ugly sister, the unloved wife?

Jacob probably wasn’t horrible to Leah but I imagine he couldn’t help his heart. He wanted Rachel, not Leah. It must have been a steady source of emotional agony for poor Leah. She must have spent her whole life living in the shadow of her exquisite sister, never feeling she was of value. Coupled with growing up in Laban’s household, her narcissistic father’s behavior must have deeply impacted her. Laban had no capacity for the human heart. Instead, he ran his life on deception to obtain financial goals. The message to his daughter was, “You are not desirable. So to get you a husband, we will have to pretend you are your beautiful sister and sneak you into a union. I will not be stuck with you.”
Imagine how she felt?

But God was with Leah.

No matter what she looked like, no matter how any man treated her. God blessed her in her marriage with His presence. He filled her womb with many baby boys.
Each time that Leah had a son she hoped her husband might finally love her, but Jacob only had eyes for Rachel.  After years of desperation to be loved by her husband, Leah began to give up. She shifted the desire of her heart to the only place where love would come in a limitless measure no matter who she was or what she did. Leah began to accept that Jacob would always prefer Rachel to her though She believed that she must stay in the marriage.
Leah chose God as her source of love!
When she finally yearned for God alone, Leah understood God was enough.

Jeremiah 29:13
You will seek me and find me when you seek me with all your heart.

God filled Leah’s emotional void as Jacob fulfilled his legal duties as a husband but emotionally adored Rachel.
If you have followed my story, you won’t be a bit surprised to know I identified with Leah in my first marriage. I never felt loved and adored no matter how hard I tried. I always felt second to something else. I felt like a burden. Like Leah, God gave me sons, and they loved me. But my husband was never satisfied with anything I did. God, Himself was the only place I found true satisfaction for my soul.  For years, I abandoned the idea of ever being loved by a husband… 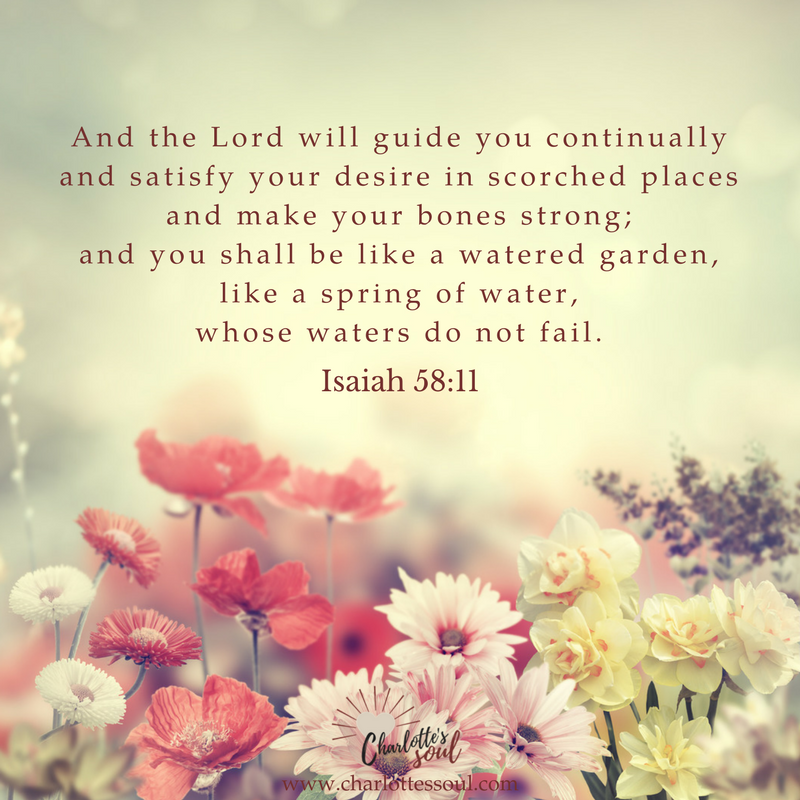 I too decided to make God my source of love and then…
After 22 years trying my best, but never being enough for my husband, after long seasons of developing a full reliance on God, He released me from my marriage. I never knew if I’d find a man, but I knew living in an environment where I felt despised just for being me, was killing me. So, I finally fled, facing insurmountable obstacles of rejection from people who I believed had once cared for me. My emotional fulfillment from God was my complete life source.

I was lonely for a man, yet God was enough.

Isaiah 58:11
And the Lord will guide you continually
and satisfy your desire in scorched places
and make your bones strong;
and you shall be like a watered garden,
like a spring of water,
whose waters do not fail.

Unbeknownst to me, in the wings of my life was a man of God. He too had been in a marriage where his greatest efforts and gifts met with a steady barrage of criticism from a wife he worked so hard to please. He was like me. He longed to serve God with his commitment to his vows and his family. He too realized he was dying from being unvalued despite his great talent and drive. Bryan left his marriage after 22 years, facing great trials and rejections.
I was alone when I met this single man chasing after God’s own heart. He saw my heart that mirrored his. We saw something in each other we both had always yearned for… a soul mate. Individually, we had both developed a full reliance on God and received satisfaction in our souls in our years of a void of companionship on earth. However, when we met, there was more than just seeing a compatible life partner; Bryan saw me as beautiful. He was captivated with who God created me to be. He earned my trust. I made sure he knew my body belonged to God.  Then the time came when God released me into the arms of Bryan. God’s chosen man for me. Just like Jacob, Bryan waited and worked for the day when I could be fully his.
Suddenly, I was someone’s Rachel.
Back to Lyn at church.
I told her that after years of being a Leah, I was indeed Rachel. Tears pooled in her faith-filled eyes as we both sat in awe in the splendor of our magnificent God.  We both realized why God never let her catch on to the fact that my name is Charlotte.

He insisted that she call me Rachel so I would see His love.

And… my soul delights!

Psalm 37:4
Delight yourself in the LORD, and he will give you the desires of your heart.

Doing soul work delights the heart. I am on a mission to inspire others to do some serious soul work. Through coaching individuals one-on-one, I help them see how God loves them and is working for their good! Connect with me to receive a free 30-minute coaching session. I promise your heart and soul has desires that need your time and attention.

Connect With Charlotte for a 30 minute FREE Coaching Session.

Just beautiful!! Thank you as always for sharing.