Revenge or Forgiveness; You Have a Choice 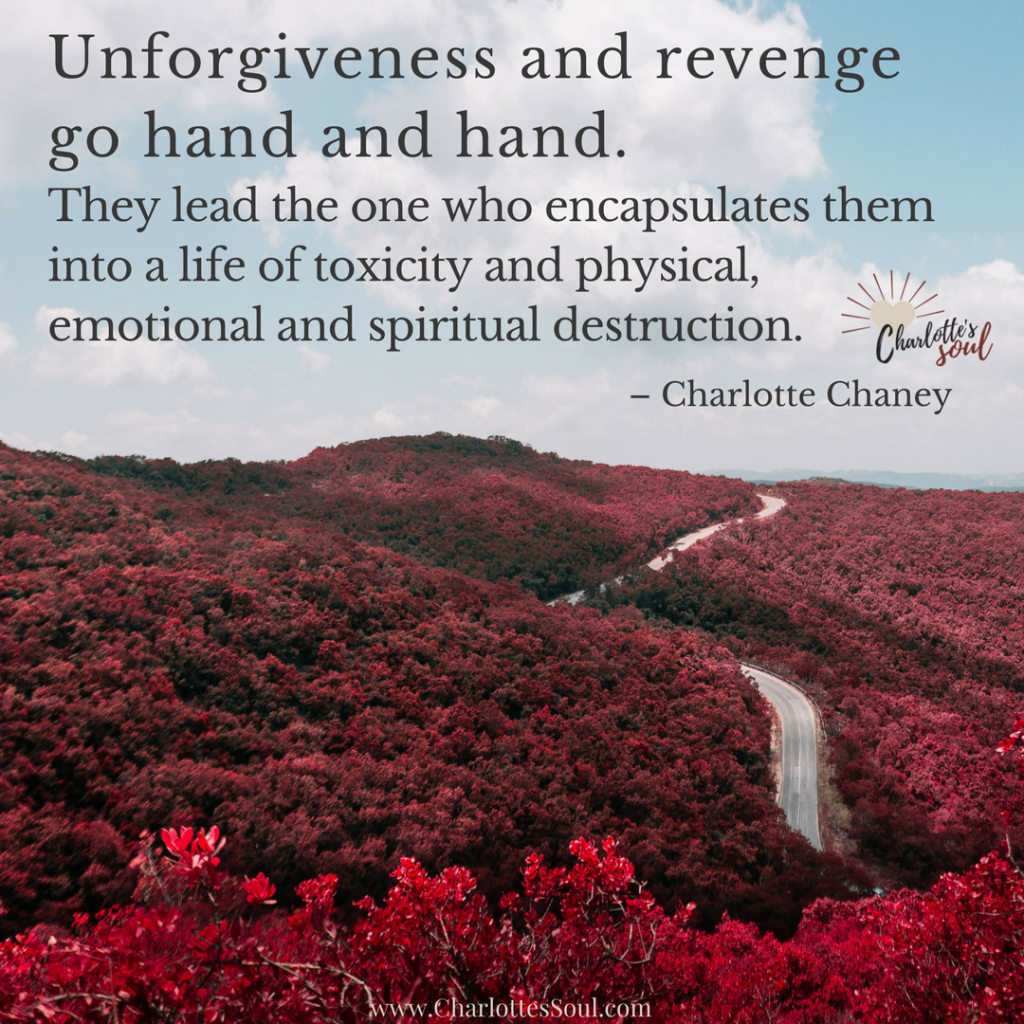 Unforgiveness and revenge go hand and hand. They lead the one who encapsulates them into a life of toxicity and physical, emotional and spiritual destruction. Perhaps the ruins in our lives, that ensue from bitterness, is why the Lord cautions against harboring these emotions.
While God warns us against retaliation, He firmly promises He will make things right for us if we trust and obey Him.

Romans 12:19
Beloved, never avenge yourselves, but leave it to the wrath of God, for it is written,
“Vengeance is mine, I will repay, says the Lord.”

Trusting God to avenge when we have been deeply wounded is the absolute right thing to do, but it is very difficult. It takes faith to trust that He’ll keep His word. Faith comes from experience, knowledge, and witnessing God do the impossible.

God always has a symphony of things happening at once, though we tend to look at life and see one snapshot. We need to trust that God is filling in the spaces that we can’t see.

My pastor was recently defining the proof of The Creator, as undeniably seen in our human body. “No man could design something that has so many integral parts, which work together so precisely.” I began to think for a minute about cells, plasma, oxygen, recovery, growth, and age. Pondering the masterpiece of the human body could leave one sitting in wonder for a long time. I could never deny the infinite Creator. The existence of God is in sunsets, plants, rivers and seasons. In the same way, He reveals Himself in nature, I see Him in His word.
I will never forget when I was in Bible Study, my first one ever, in 1998. I read:

Romans 10:15
And how are they to preach unless they are sent? As it is written, “How beautiful are the feet of those who preach the good news!”

The words were coming from the mouth of a woman whom I found myself captivated by her beauty. Don’t get me wrong, she was plenty attractive, but the beauty I was captivated by was not hers, it was His. It was coming from her, and I realized what was happening. I realized then that the Word revealed the beauty of those carrying the Word of God, I was experiencing it, and suddenly I began to believe the Bible.
Suddenly I was confident to latch onto what was written, regardless of how I felt, or how my mind insisted on making ends meet. What was impossible for man, was suddenly possible for God. I was an ‘all-in’ believer. When I began to let go of things I could not control and trust God to handle my needs, I began to learn how capable and creative He is. How limited my view is. I would ask Him for things only He could provide. He blew me away over and over.

There were also times He seemingly didn’t answer my prayers.

For years, I wrestled with Him. I reminded Him of how faithful I had been and how hard I was working for His glory. He did not move.
As a new believer, I was in what some call a honeymoon phase. I’d ask, He’d give. Like an orphan having a parent for the first time. Like a parent who has been waiting to give good things.
What about when the orphan desires something that the new parent knows is not best? 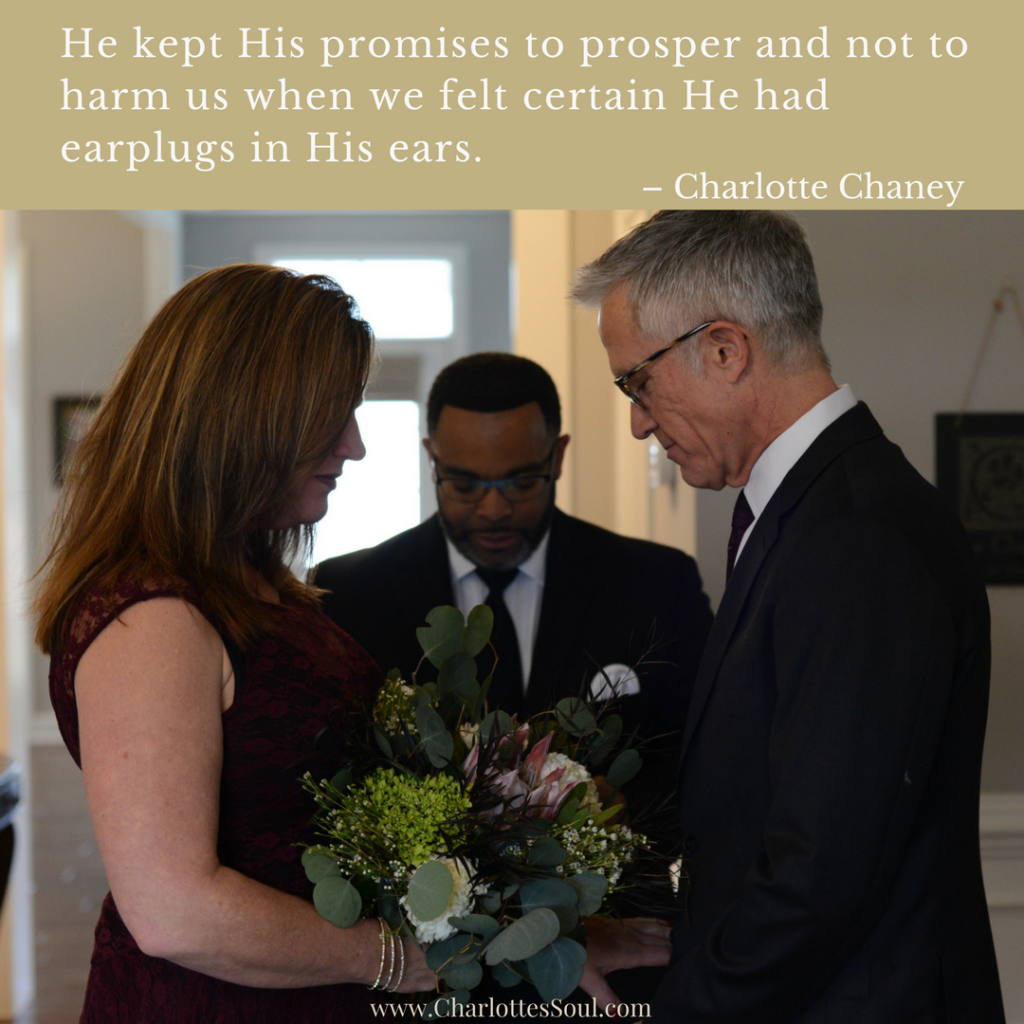 My husband tells a powerful story about when his children were young, and he denied them one thing, knowing something greater was in store. He was going to surprise them with a trip to the fair. When the ice-cream truck came into the neighborhood, the children pleaded for a treat. He said no. He didn’t want to share the surprise he had in store for them.
All the children could see, was the fact that their father was resisting their pleas for a trip to the ice-cream truck. They were confused at his refusing something that seemed so basic.
What was wrong with him? Could he not see they deserved an ice cream? Was he making a bad decision that they needed to correct him about? Or was there something that he, as their father, knew that they were not ready to conceive?
I had a similar situation with my marriage. To say I acted like a child who was not able to have an ice-cream bar when there was something unimaginable in store for me, would be the understatement of my life. I saw God answer all kinds of prayers. There was, however, one area where He never let me have my way.
My marriage was painful. I began to grow in my faith. I began to radically change my behavior to better match His blueprint. I couldn’t, for the life of me, understand why He would withhold something so Holy and something He greatly values, from me. I had been faithful. I worked towards submission and turning the other cheek. I laid down my life. I was longsuffering. God refused to give me what I was begging Him for and was mad as well as confused.
I knew God could make everything perfect. He saved the world through a baby, born to a virgin in a barn. He parted the seas and expelled demons.
“Why won’t You save my marriage?” I yelled at Him. I waited patiently. I prayed fervently.
There were times I believed He’d finally answered my prayers. I praised Him mightily. But alas, the changes were superficial. They were not real. The pain always resurfaced, more scalding than before. I still learned to praise Him in my pain.
Finally, after 23 years of giving everything I had, I grabbed God’s hand and walked away. I believe God hates divorce. I believe God values the original commitment made between a husband and a wife. I simply could not live another day in that marriage. I walked in faith, leaning fully on God, with almost no support from anyone. The opposition was robust from church leaders, Christian counselors, and friends who had given years of time and hours of prayer to save our beautiful family of six.
I knew how the fallout of my own parent’s divorce had affected me. I had vowed never to allow that to happen to my children. My emotional resources were depleted, and I could not stay. I left knowing that divorce is never God’s best. It was, however, the only route I could take. I knew He would go with me.
I had no concept that the equivalent to the fair vs. the ice-cream truck was in store for me when it came to a new husband. When God finally revealed us to each other, we discovered that we both had been wrestling, the same way, over the same things, with God. He too faced an army of Christian opposition against what he needed to do. He had done most of the same things I had done to save his marriage, which also included four children and had lasted for 23 years.

1 Corinthians 2: (ESV)
9 But, as it is written,
“What no eye has seen, nor ear heard,
nor the heart of man imagined,
what God has prepared for those who love him”—

Alas, we could both savor the storehouse of blessings God had for us. He resisted our pleas for what we wanted. He knew they were a trip to the ice-cream truck. He also knew there was a trip to the fair if we patiently waited and put our faith in Him. 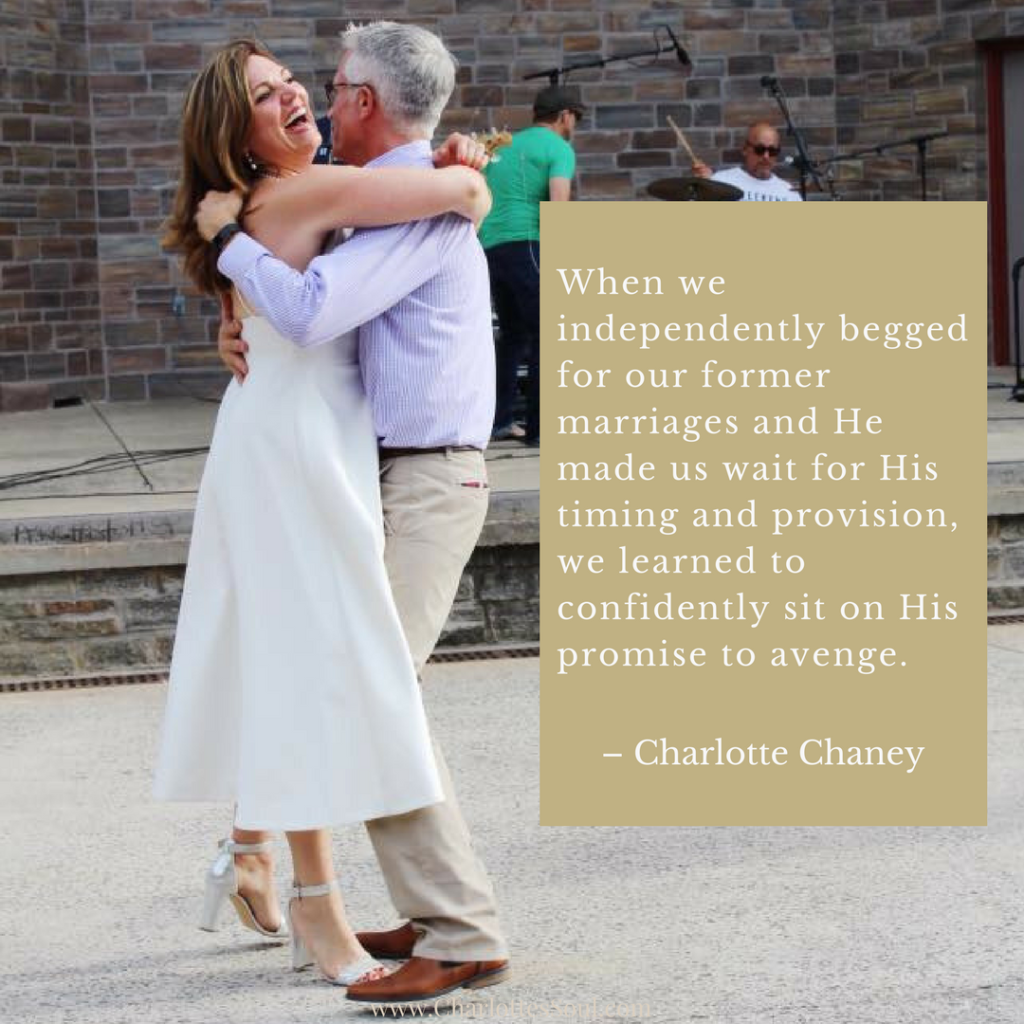 Years later, we’d both love to say the divorces are over and everyone has moved on. Sadly, we are both in situations where we are not able to co-parent as we would like with our former spouses. We face ongoing scenarios that mimic what we both faced in our former marriages. Oh, how tempting it would be to harbor unforgiveness and come up with plots for revenge. However, the same way God revealed extraordinary beauty in an ordinary woman in my Bible study in 1998 His words still holds true. He kept His promises to prosper and not to harm us when we felt certain He had earplugs in His ears. When we independently begged for our former marriages and He made us wait for His timing and provision, we learned to confidently sit on His promise to avenge.
How about you? Are you marinating over something with doubt, fear, vengeance, and unforgiveness? Where in your life can you identify something that was absolutely divine? Can you believe the same God who revealed himself to you in that situation, might have the equivalent of the fair, in store for you? Could that be why He’s saying no to the ice-cream truck?
Consider coaching with me. I am beginning to see great things developing in clients. I am committed to growing the gifts God has given me and pursue the training to be the best I can be for Him and all whom He has ordained to grow through the work He’s given me to do.

Charlotte, you’re spot on. Decades ago, in the bruising corporate world, at the top of my game, I lost everything I’d worked for as an 8-year CEO to a corporate coup d’état. I had two kids in college, another in high school needing a $25,000 a year drug after removing a brain tumor, and another who needed good support as he was deaf and mainstreamed in a local Elementary School, and a $36,000 per year mortgage–in the middle of a recession. I had immediately forgiven those involved in the treachery, and, after using up my fortune in an unprofitable start-up over three years, moved to a faraway city to restart at a lower level. For 30 months, I supported my family back home while living alone in an apartment 2,000 miles away. While living alone, I kept asking the Lord, “Since I forgave John (not his name) immediately, I continue to discover the damage he did to me is even greater than I had imagined, and I find myself forgiving him again, and again, and again. What gives? How can I forgive him one last time and make it stand? The Lord immediately put a new thought in my mind and I replied to Him: “O.K. Here’s what I ask of You, Lord. When You greet me as I arrive in Heaven, I want to find ‘John’ there beside You.” Although John’s harm to me and my family remains to this day, I know that I have asked the Lord to forgive him, in a way that will require John being saved, and dropped my charges. Not amazing, but truly stupendous, I know this is a done deal. Then, I started asking that for everyone who has harmed or hated me from childhood up the the present. I figure there will be hundreds by the time I get there. But here’s the punchline, with John and all those hundreds, I’ve never again borne them ill-will, it has vanished, for He gave me this gift and I fill in the blanks and return it to Him. It all really started when He forgave me, and my job is to pay it forward.

Always great to hear from you Brother. Wow, that is very powerful. Thank you for sharing something so valuable that many of us can gain from.