How A High School Coach inspired Me in My 1st Triathlon 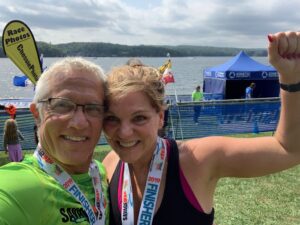 Long before Brangolina and the like were around, I created a blended name for a man who impacted my life, though I bet he never knew it. He was Glen Lempke, my bike coach in high school.

He was a tech guy, like my husband, and taught all the courses I wasn’t interested in, so I mainly knew him from biking. Today as I completed my 1st mini-triathlon at 50, I thought a lot about Glempke. I thought I’d write about it, so his offspring, who may not know the impact a teacher has in the life of a child, might see the impact their loved one had on me. He is gone now, a life taken much to quickly, and from social media, I can see he left many loved ones in his path.

You never know who you are reaching or how many years it will take to set in. I’m 50 and yesterday I was still saying, “No way I can’t do it,” but today I was a finisher!

I felt so out of place when I was in the “Athletes Only” area since my comfort zone is really on a yoga mat. I’ve been trying to train all summer but the 4th of July I got a virus that knocked me out, it felt like the resurgence of Lyme’s Disease, which I had quit treating after feeling so wonderful until I felt awful. Leading up to the race, I had only been able to swim 400 yards, suffer through a spin class, and get 3 miles on the elliptical and not on the same day!

‘Well, I showed up!’ One accomplishment. Then, I made it to the 1st turn in the 750-yard swim. I knew I could get a ride back, but even though I was scarily dizzy, I pressed on. The next turn, and I was in sight of the finish. Mind you, I wasn’t out to win, but I wasn’t last, although I was in the last heat. As I thought of the people behind me, I thought of a lifetime of being last, not there at all, or quitting. One girl said she was scared and I offered to help her. I saw another riding off on a kayak. I just kept getting closer, and before I knew it, my feet were on the ground. I walked out proud of myself, but wishing some of the other people’s support system would have given me an “attagirl”. If they only knew what I had just accomplished.

Still not sure I would do more, I went through the motions of putting on my shoes and bike gear. Then I walked my bike up the first hill and mounted it. Sitting on, it felt really good. That’s when I started to think about Glempke. It was beautiful, and I had forgotten how much I love to ride a bike. I thought about all the times I’ve leaned on my front brake and gone over my handlebars, and before I could quit, I was well into the 1st half of the 16-mile ride. At one point, I wanted to cry, and I wish I had just let myself. I took a little selfie for Snapchat as my son Grady had been a massive inspiration for me to press on.

I wanted to quit. The other riders on the way back loved on me a lot. “Good job, you got this,” I guess they could tell by my lack of speed that just being there was a big deal. It was a long ride to the halfway point, but as I approached one guy said, “the 2nd half is easier.”

I was again thinking about Glempke and all the rides I took out in Western New Jersey as a lost teenager. I prayed a lot. Perhaps you know I almost lost my life to stage 3 rectal cancer eight years ago. I thought a lot about the folks who have inspired me like my friends Dana and Janna’s dad who just did seven marathons in 7 countries at 70, or something like that. My pastor’s wife, who almost died, and was in bed for a year after her 6th child, she now runs marathons for each of her children. I thought about my self-image and how athlete was not in the mix, but here I was. I thought about my husband who believes in me and pushes me, and I am hard to move.

“I don’t have to do the last leg; I can do a biathlon.” I began coaching myself. “How would it feel to complete a triathlon? How would it feel not to complete it?” I don’t run, and I was content with walking. I saw Bryan as I headed out for the last 3 miles on foot. He had completed the race. He inspired me, “You can so do this,” and so I set sail.

I thought about the novel and the memoir I am in the process of writing and realized I will bring them to the finish line too, despite all the limitations I have set on myself.

It was a long walk but beautiful. Getting to see the land that is now my home, was one of the most gratifying byproducts of the race. It is so special from afar, but you don’t get experience what I did today, from a motor vehicle. I was inspired to go for more hikes and bikes. We live 5 minutes from the race, next year we’ll ride our bikes there!

I am grateful for my biking coach some 30 years ago and the impact he left in my life that I can still recall today.

Oh Charlotte, your words meant so much to me and i certainly will Be forwarding your story to Molly, now 38, and Kelly, 36.

CongratUlations on ACCOMPLISHING something you thought was out of reach for you. It must have felt good for your mind and body. No matter what age, you prOved new goals can be set.

I wish you lots more accomplished goals with lots of love in your decades ahead.

Glenn went for a 10 mile bIke ride the day he dIed. It was Christmas eve 12/24/2015 and 72 degrees, very unusual for VT. Glenn greased up his bike and away he went with a giant smile on his face while i stayed back recovering from my stem-cell transplant.

One never knows what is around the corner but being grateful, as you were with your words, for something today gives life much joy.

Be Well, CHarlotte, and keep On keeping on…