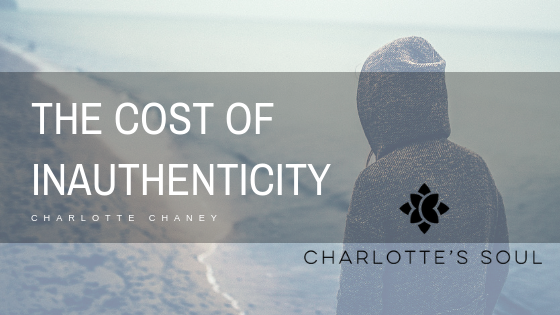 The Cost of Inauthenticity

I know a lot of people who sacrifice their authentic self; the person God ordained to bring into the world, for a purpose, for such a time as this. Reason: to stay in the ‘comforts’ of the façade and the ruts they have let the foundation of their lives manifest in.

This is not a message to promote divorce. Divorce is excruciating. I have lived through it as a child, and have experienced I after 23 years of marriage. The expanse of the pain exceeds the confines of the marriage itself and will last for generations to come, on some level. Unless divorce is the absolute last resort, no one should ever consider it. In some situations, however, when all else has failed, God allows for a marriage to end. I believe it is in that case alone that true authenticity is expressed to better our world.

So many people are clinging to their dreams, religious rules, or the denial that consumes them. Meanwhile, inauthenticity is leading to spiritual, environmental, emotional and physical, destruction. The damage that results from living a lie manifests in all kinds of places: family relationships, churches, our bodies, the workforce and yes in many marriages.

Inauthenticity adheres to people’s lives in large part due to money. Divorce, relocating, getting a new job, etc. is expensive. Tragically the one who leaves for an authentic life faces increased wrath. It is common for one partner to exacerbate pain by hiding bills that are in the other person’s name, let policies lapse, vie for custody, and use everything in their power to hurt the one who left. This frequently includes rallying loved ones to turn against their former partner, as they portray themselves as a victim through manipulation. Often one parent will successfully turn children away from the parent who fled the façade. Many people whom I have met over the years eventually discovered they were manipulated by one parent and in some cases were never able to regain lost years after they saw the truth.

The cost of being authentic is massive.

In some circumstances, people stay in an emotional cesspool because they have faced threats and accusations that were so cleverly presented that they couldn’t begin to imagine how life would look if they were to leave. Often a choice is made to maintain a church position or to remain part of a social group of family and friends. They cannot imagine life apart from the crowd that encircles them. Not to uphold the outward image that they have exerted so much time and energy into constructing, isn’t anything they can grasp.

I speak from experience, and my situation is very similar to many other people’s. Being authentic required great faith. Faith that the God who ordained my first marriage, actually opened the door for me to move in a direction that I never imagined and in which I desperately didn’t want to go. It required faith that God would provide, not only for me but for my children and the generations of people who would be affected by the sharp division. However, if I had not taken the leap of faith, I would have continued to endorse raising a family in a house full of lies, discord, and deception under the façade of “happy Christian family.”

Not being authentic, because you are worried about how you will look as a Christian is, in fact, drinking the devil’s Kool-Aid. It will destroy you, your ministry, your family and everything you hold dear, from the inside out. In addition, it denies God the chance to shine through the extreme brokenness that we face when we abandon our plans for His.

Others can see the truth, regardless of how desperately we try to hide it. Especially children who are immersed in a home where the contrast between what is displayed to the world and what is lived, is the greatest lie. Children are keenly aware even if the disconnect is subtle. If the lies are not corrected children are likely to continue building a foundation that is being established in their home of origin. Regardless of the lies inside the family, people are still determined to follow the rules and are adamant in their refusal to be true.

Authenticity is not popular, and it will bring rejection.

I remember all too well being the ‘woman of God’ whose title was removed in many circles when I could no longer take the pain of living a lie. I learned in day one, who my true friends were and who was only there for the ‘married-to-my-first-husband’ version of me. The pain of seeing the true colors of others, after I dropped my facade, was devastating. However, it was freeing to understand the limited nature of many of my friendships. I walked away thankful that I didn’t invest any more time in people whose presence in my life was conditional.

Imagine one girl whose husband not only degrades her to her face but has an active pornography life. No doubt his sexual addiction requires increasing added risk, creating the same excitement that significantly less profanity once created. It borders on or is just plain illegal. The lack of emotional intimacy that exists in a relationship where pornography is present is well documented. However, leaving her husband would require giving up all she has. So she sells her soul for a lifestyle and family that only exists if she stays living a lie with her sick-abusive-husband.

Another girl lives a life she never wanted because she has a lot of kids. She avoids her reality by generating an exhausting social life. If she were to be true to herself, everything would come crashing down. Those friends who are there for the good times wouldn’t be there on a changed path. It is the shallow measure of a friend that I know all too well.

Many people are seemingly content living in duplicity. They seek to have their emotional or physical needs met outside of their marriage. People actually convince themselves why their infidelity is alright. They can’t get what they need and yet they are keeping their family together, and divorce is too costly. In other words, ‘I’ll do a lot of things to live Christlike, but I simply cannot be authentic in my marriage, there is no way.’

Trust me I want more than anything for marriages to work, but I also think nothing interferes with a Christian’s calling more than living a lie. I speak from experience. Many around me didn’t encourage me to live authentically, and actually abandoned me when I did. I have come to believe they are battling their own demons and façades. Perhaps focusing on the marriages of others’ marriages helps them avoid their own inauthentic ways.

When I finally sought God not what I thought God wanted, but when I actually turned to God, I was brought to the land of plenty. It took great faith to finally reach the point where I realized the wheel I had been running on for years was never going to end. I had been chasing my hope and dreams but it was nothing but an endless circle.

I was only going to discover the desires of my heart when I trusted my God and believed Him to be my all and all, come what may. He must have been so thrilled when I said, “I don’t know what is ahead of me, but I know You, and that is all I need.”

Delight yourself in the Lord,
and he will give you the desires of your heart. Psalm 37:4

I know this is resonating to the core of many you. Some of you have a loved one you know needs to make a big change. You see the destruction but they are unable to seek what is best for their family and themselves. Love that person, but keep a boundary. It is ok to say you are not available to listen to their saga anymore. I know in my case, several loved ones put the brakes on my constant complaining when I was not willing to do anything.  That hurt but it was done in love and modeled for me self-care. It was an important step to get me to move forward into my truth.

This is a complicated topic, but it needs to be addressed. This is a quickening for someone who needs it.

Are you authentically living out your calling?

Are you clinging to your life or are you stepping out in faith and letting God direct your path?

John 8:31-32  So He said to the Jews who had believed Him, “If you continue in My word, you are truly My disciples. Then you will know the truth, and the truth will set you free.”

If you need someone trustworthy to confide in I am a life coach and I wold love be a support system for whatever your goals are. A great place to start is to begin a self care journey. It is impossible to care for yourself and let someone hurt you.  Order my Soul Work Journal at CharlottesSoul.com